Burning Gas to Cool Down!

It seems strange to think of burning gas to provide cooling, but in many cases it makes perfect sense.

An absorption chiller utilises gas to heat an ammonia solution within a sealed refrigeration circuit. Heating causes the solution to dilute, a process which absorbs further heat, thus providing the cooling effect. The principle has been used for many years in refrigerators, particularly in the USA, and gas absorption fridges remain popular today, especially with campers or in locations where there is no power. For a brief period, they became popular purchases for domestic kitchens but fell out of favour as electric fridges became cheaper and lighter and as gas fridges became understandably perceived as a potentially hazardous appliance for indoors.

Then there is the large industrial application, usually where there is an abundance of a “free” heat source, steam or hot water generated as a result of an industrial process which can then be used to drive a large absorption machine and provide cooling. Typically, these large absorption machines are 2,000 to 4,000 kW and use lithium bromide as a refrigerant instead of ammonia.

The third common type of application is for commercial comfort cooling where a small air source chiller uses ammonia to provide 18kW of cooling and the double effect can recover this heat for free hot water. 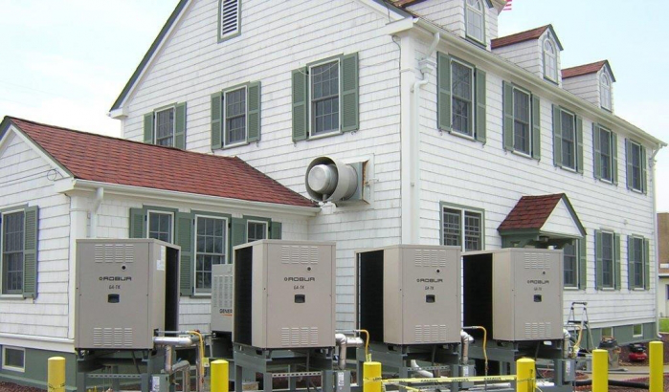 4 chillers deliver 70kW cooling for the US Coastguard

So why might you use a gas absorption chiller instead of a conventional electric chiller? After all, it will be more expensive and needs the additional services of a gas safe engineer.

There are the obvious applications where power is either insufficient or expensive to install. There seems no sign of an end to the spiralling cost of upgrading power to commercial premises. Undoubtedly these costs, and the associated delays with delivery, are partly in place to discourage work which will heap further demands upstream on an already struggling network infrastructure. On the other hand, most buildings have a sufficient gas supply, particularly and significantly under-utilised in the cooling season.

It also appears that there will be a plentiful and inexpensive supply of natural gas for the next 2 or 3 decades at least, until alternatives such as nuclear or renewables come on line. Less obvious is the benefit of low long-term maintenance and a long running life expectancy. With no compressors  and far fewer electrical parts, component replacement is rare and inexpensive, and gas chillers run what seems like forever, certainly much longer than the 10-15 years you’d expect from an electric chiller. Finally, but importantly, ammonia or lithium bromide solutions are exempt from F-Gas regulations, and as such don’t require the annual checks, audits or potential future restrictions on their use as restrictions on refrigerants are inevitably tightened.